For wave and tidal potential, geography is definitely on our side 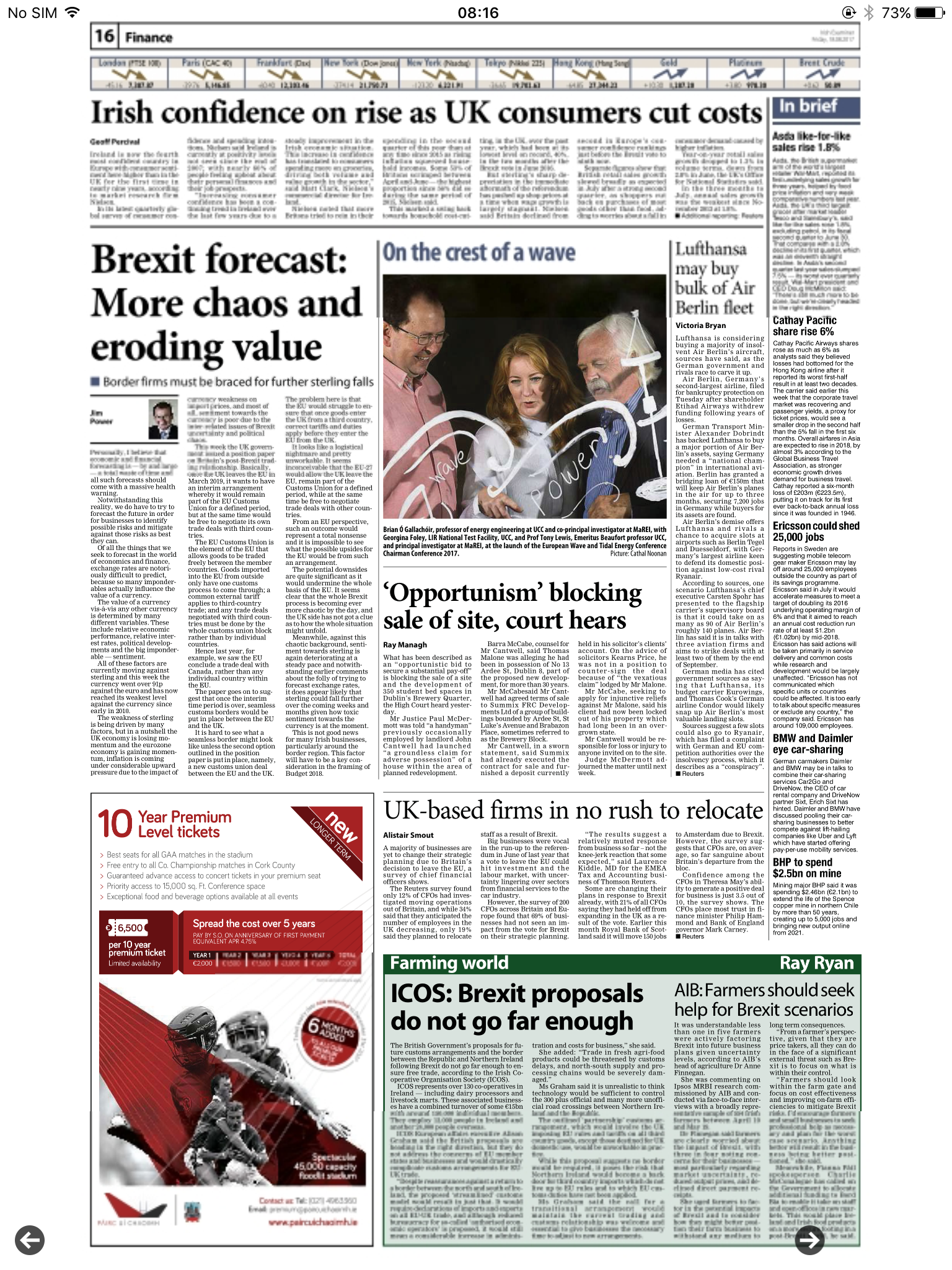 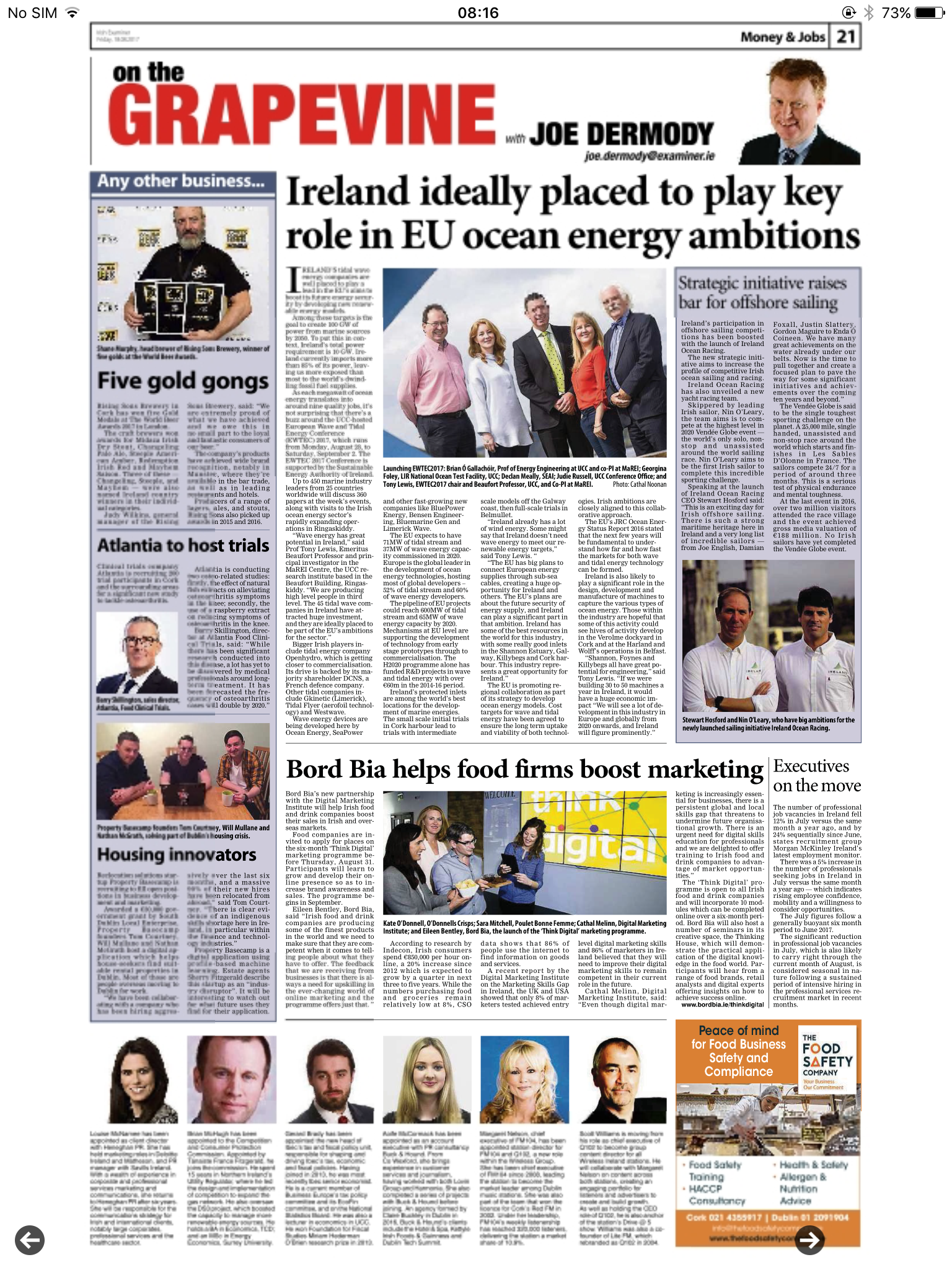 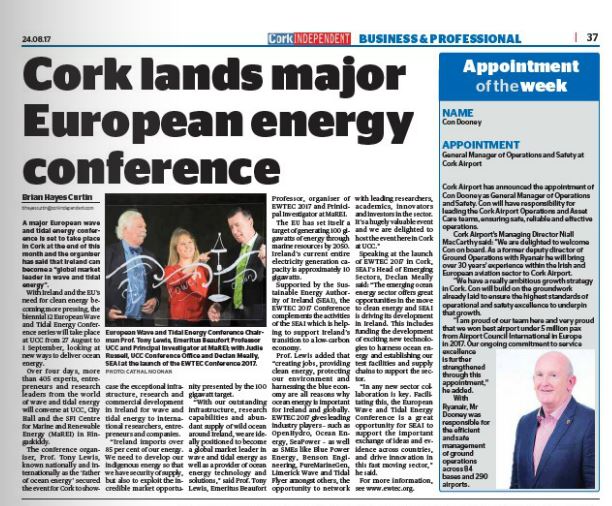 Dignitaries, Kayaking and Music: UCC To Host The Largest EWTEC Conference To Date

When University College Cork first hosted the European Wave and Tidal Energy Conference in 2003, the event attracted 160 delegates from across the marine renewable energy sector.

Since then EWTEC has grown in size and stature. This year UCC will play host to the largest conference to date, with over 450 delegates presenting more than 336 papers across 78 individual sessions and 30 further participants exhibiting their research as posters at the conference.

Such is the scale and magnitude of the event, Professor Tony Lewis and his organising team are taking full advantage of the impressive array of facilities available at UCC.

The Glucksman Gallery will stage the conference reception on Sunday August 27, the University’s lecture theatres will host the presentations, while those exhibiting their research as posters will do so in Devere Hall.

Indeed, given the significance of the conference, Lord Mayor of Cork, Tony Fitzgerald, UCC President, Patrick G. O’Shea, Minister for Communications, Climate Action & Environment, Denis Naughten, and SEAI CEO, Jim Gannon, have all agreed to open the conference at a plenary session at 9 am on Monday August 28.

Along with each of the delegates, the plenary speakers can look forward to a series of fascinating papers covering topics such as; wave energy development, tidal energy, power take off systems, operations and maintenance, alongside economic and environmental issues.

In turn, Professor Lewis points out that the cutting edge research being presented at the conference affords the industry the opportunity to meet bright young people, observe the latest innovations and see what the future of the marine renewable industry might hold.

Undeniably, this is an exciting time for the industry as a whole. The European Commission have set a target of 100 gigawatts of electricity to be generated from marine renewable sources by 2050. To put that into prospective, that is enough to power up to 37.5 million homes across Europe.

Ireland’s advantageous geographic position on the edge of Europe provides us with the opportunity to make a significant contribution to the Commission’s target. In fact, Lewis calculates that Ireland has five gigawatts of supply in the seas surrounding the island.

To put that in to context, a nation with less than 1% of the total EU population could provide 5% of the Commission’s target. In fact, Lewis believes Ireland possess the best resources anywhere on the planet.

Apart from our geographic location, a world class research environment has been fostered here through the provision of outstanding infrastructure such as the LIR National Ocean Test Facility in Ringaskiddy, the Galway Bay test site – Smart Bay – offering quarter scale test facilities at sea. The Atlantic Marine Energy Test Site in Bellmullet, which when fully developed, will be able to provide grid connection for full sized commercial devices.

Consequently, Ireland will be able to provide the whole chain of facilities allowing people to develop their research and marine energy devices and is “very well placed to realise the outcome of this extremely exciting industry”.

To some extent, we are already doing so. In the wave energy area, Ocean Energy are in the process of constructing a pre-commercial one megawatt device which will be deployed off the U.S. and Scotland after completing three years of testing in Galway Bay.

Sea Power have recently completed their first phase of testing in Galway Bay and are in the process of planning their next phase with an improved power take-off system which they hope to deploy next year.

Benson Engineering and Blue Power Energy have both received funding from international sources such as Wave Energy Scotland.

Pure Marine Gen and Limerick Wave were finalists in the US Department of Energy’s wave energy competition.

In the tidal energy sector, DP Energy, based in Buttevant Co. Cork, are developing a project off Fair Head Co. Antrim which could supply enough energy to power 70,000 homes.

GKinetic are also testing a tidal turbine in the Limerick dock towing facility, while Tidal Flyer are developing a novel aero-foil system in Ireland.

These companies are not just operating in the research and development phase. Based in Greenore Co. Louth, OpenHydro, – the world’s leading tidal energy company – are producing commercial devices for deployment in projects off France and Canada.

Acquired by the French defence contractor and ship building company DCNS in 2013, OpenHydro are now in the process of building a large production factory in Northern France.

Due to the level of activity occurring in Ireland, Lewis expects to see “a large deployment of devices in future, particularly wave energy devices”.

That future is closer than many of us might imagine. In 2019 the ESB hope to deploy a five megawatt project called West Wave off the coast of Clare. Indeed, Lewis believes there will be a “significant deployment of marine energy devices in Irish waters” by 2020.

The benefits of developing these projects are enormous. At present, Ireland imports 85% of its energy needs, making supply very vulnerable in an increasingly uncertain world.

Ireland is presently taking the right steps to foster the development of marine renewable energy, however Lewis believes the industry needs “continued political will to support companies at early stage development”.

“Keep in mind the EU Commission has set a target of 100 gigawatts to provide for Europe by 2050.

That means 40 devices being constructed each week between 2025 and 2050 which could potentially take place in Greenore or other places around Ireland”.

Lewis mused, even the United States, who are withdrawing from the COP 21 Paris Agreement, see renewable energy as “an opportunity to ensure the security of energy supply, create jobs and deliver a clean environment for everybody into the future”.